Contributor Zara Shoosmith recently wrote an article about board game terminology and how their widespread use in conversations can be confusing and intimidating to new gamers. I am guilty of assuming that everyone will understand when I use a term such as 'king-making'; I do not use the term to consciously exclude people from the conversation but that is in fact a likely result. This whole topic is an issue I had not considered before; joining a board game group already has significant barriers to entry and we must do what we can to make new gamers as comfortable as possible. In future I will try to make sure that if I use jargon, I immediately offer an explanation to those who may not understand. If you are a new gamer, there is also something you can do: read around the topic, consume lots of board game media and, if necessary, consult this handy reference guide designed to explain terms that you may come across.

A game where the theme is very abstract; the most famous example of an abstract strategy game is Chess where the theme bears little relation to the gameplay. They are often, though not always, entirely skill-based i.e. luck plays no part and the most skilled player will win.

Other examples include Onitama and Quantum (pictured below). 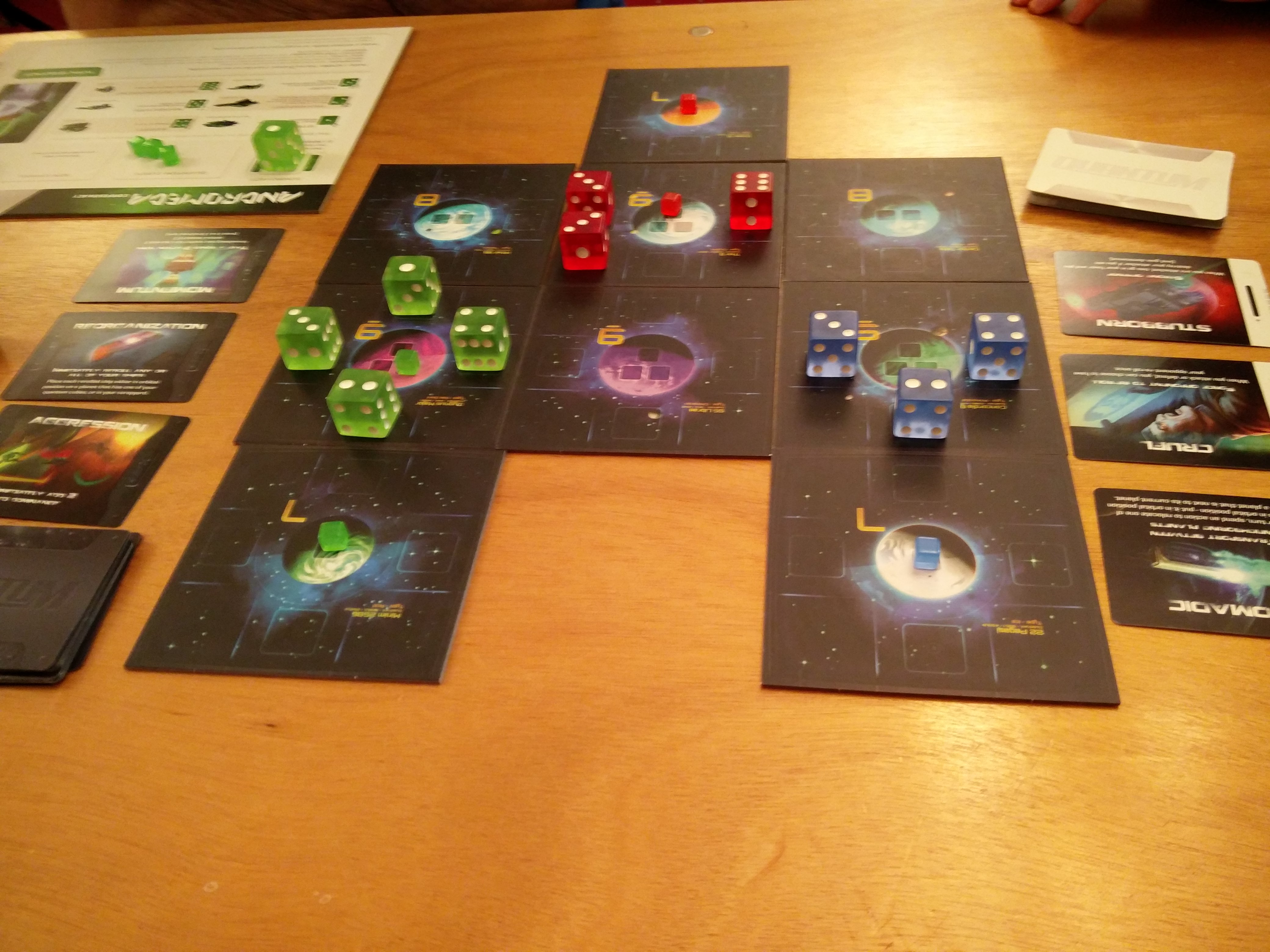 Instead of selecting actions one at a time, players must make plans for a number of turns ahead of time. This requires foresight and good planning and the end result is often one of hilarity when you realise you've made a mistake, or else another player has (deliberately or otherwise) spoilt your plans.

A phenomenon particularly prevalent, and obvious, when playing co-op games. This is a player who has effectively taken control of the entire game by telling other players what they should be doing. While this can help secure team victories, it is not something that should be tolerated more than very occasionally as other players will probably question why they are even 'playing' the game and leads to feeling excluded and unwanted.

Ameritrash is a catch-all term for 'American-style games.' In general, this means games that emphasise a highly developed theme, the use of Miniatures (see below), characters, heroes, or factions with individually defined abilities, flavour text designed to immerse players in the game's world, strong player interaction, dice rolling and often feature a moderate to high level of luck.

Examples include Forbidden Stars (pictured below) and Twilight Imperium.

Analysis Paralysis, or AP, is the curse of over-analysing. It’s when somebody is such a perfectionist about their moves that they have to be absolutely sure that no mistakes are being made. It’s the tendency to second guess every single one of your ideas. It is a blight on board gaming and must be eradicated (this is meant to be tongue in cheek...mostly).

In the interests of keeping a friendship, I have decided not to include a picture of a particular perpetrator in my gaming group.

A particular kind of game, often taking place on a map, where controlling areas gives players specific benefits. The classic example of area control is Risk where holding more countries and controlling entire continents gives you more armies to conquer other areas.

Games where all players work together on the same team trying to beat the built-in artificial intelligence of the game system. The players win or lose as a team.

Examples include Pandemic and Robinson Crusoe: Adventures on the Cursed Island (pictured below).

Deck or pool building is a mechanism in which players start the game with a pre-determined set of cards or player pieces and add to or adapt those items over the course of the game. Many deck building games provide the players with a currency that they use to "buy" new items that are integrated into the deck or pool. These new resources generally expand the capabilities of the player and allow the player to build an "engine" to drive their future plays in the course of the game.

Examples include Star Realms and Automobiles (pictured below). 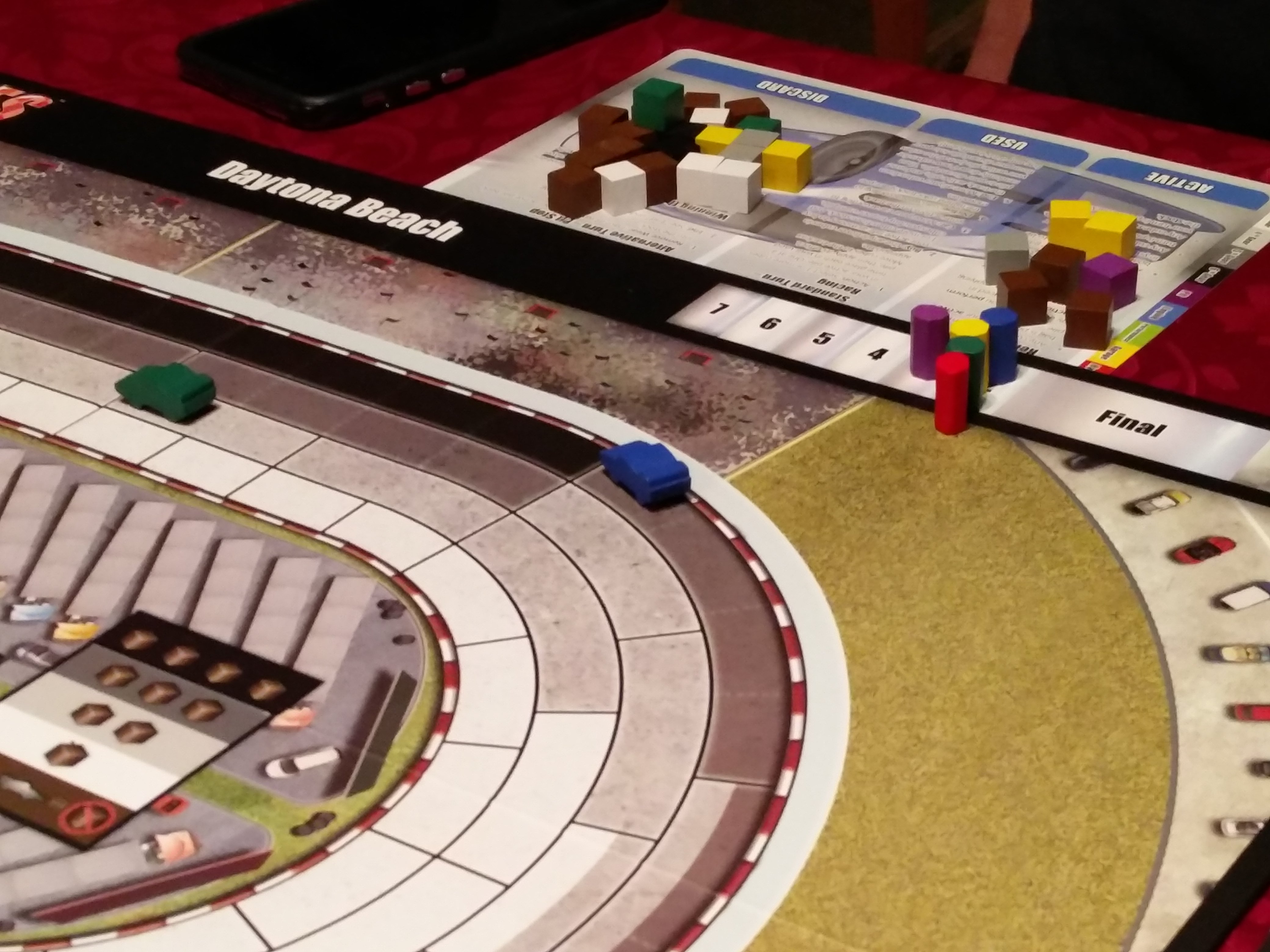 A lighter game that focuses on dextrous actions such as flicking discs or building towers. Especially suitable for youngsters, but equally hilarious with the right kind of adults.

Examples include Rhino Hero (pictured below) and Flick 'em up. 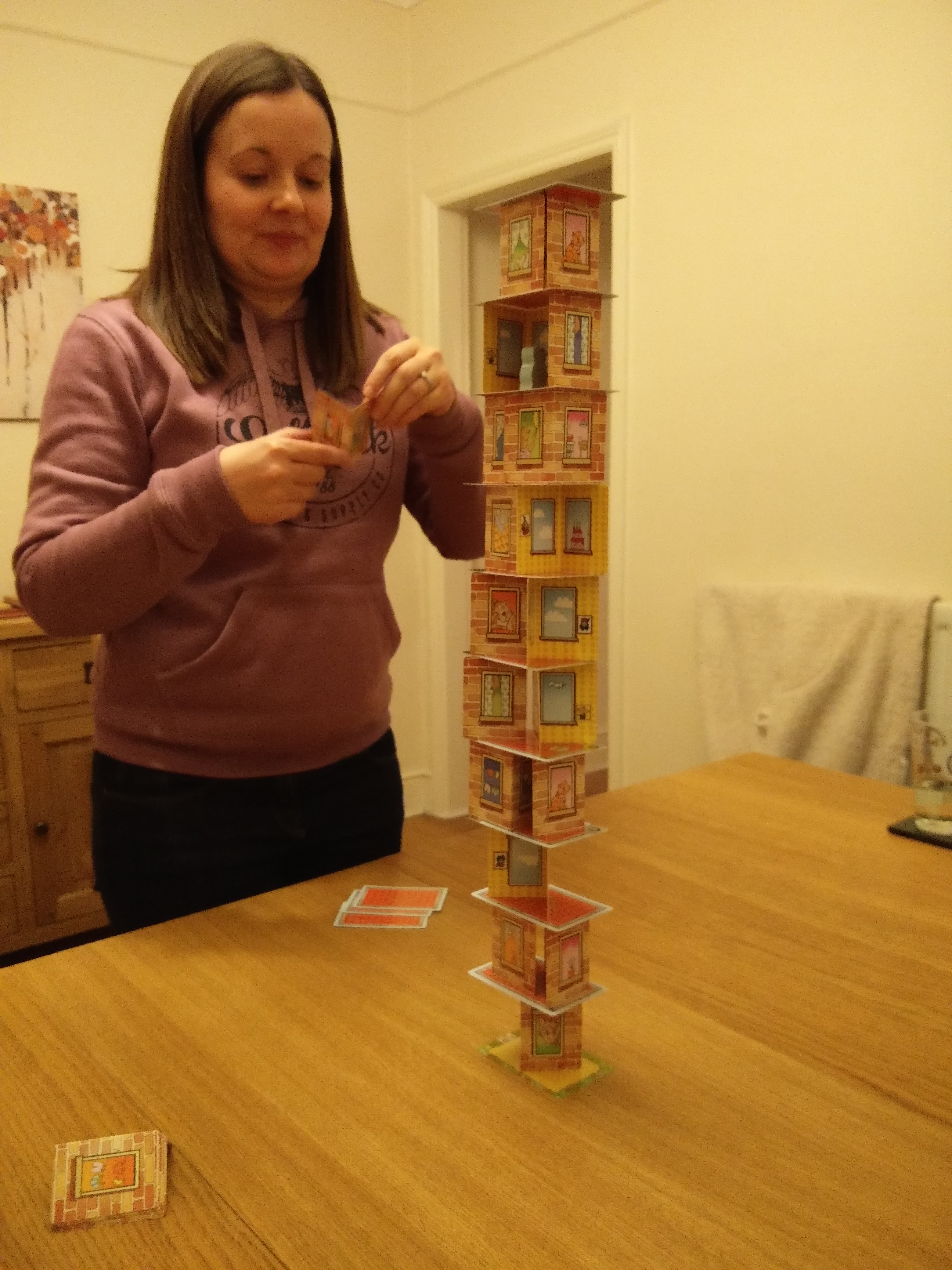 This is effectively a sub-category of worker placement where players place dice instead of meeples to take actions. Often, players roll their personal selection of dice at the start of a round; those rolls then dictate what actions they may perform. Unlike traditional roll-and-move games (Monopoly for example), players will usually have ways to mitigate unfortunate rolls so it is not unfairly based on luck.

Examples include Kingsburg (pictured below) and The Voyages of Marco Polo. 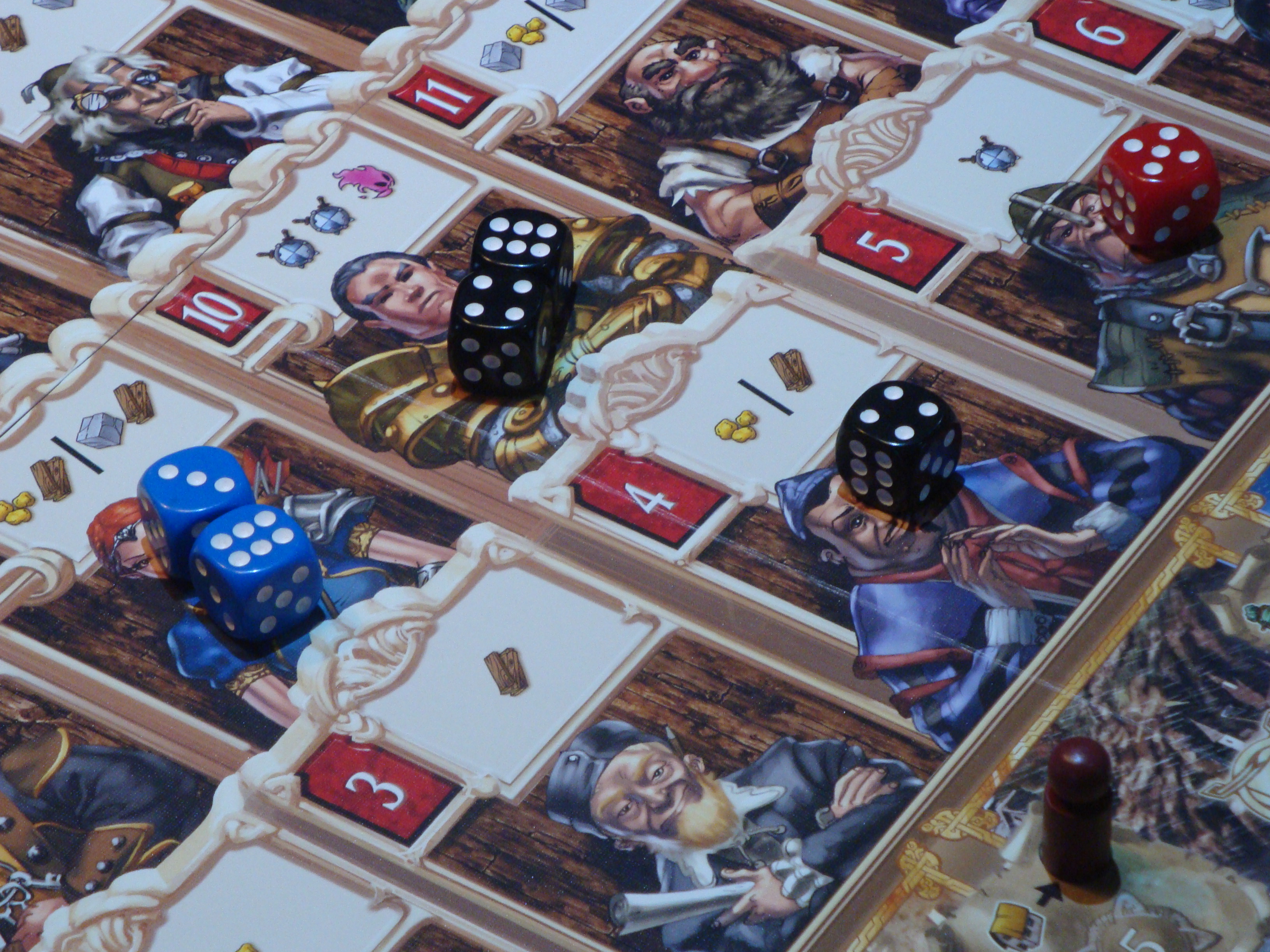 Drafting is when a player chooses an available item (often a card or tile) from a selection open to other players. This may be in the traditional sense of being handed a selection of cards, choosing one and passing the rest on, or indeed selecting something from a public pool open to all players.

Examples include 7 Wonders, Sushi Go! and First Class: All aboard the Orient Express (pictured below). 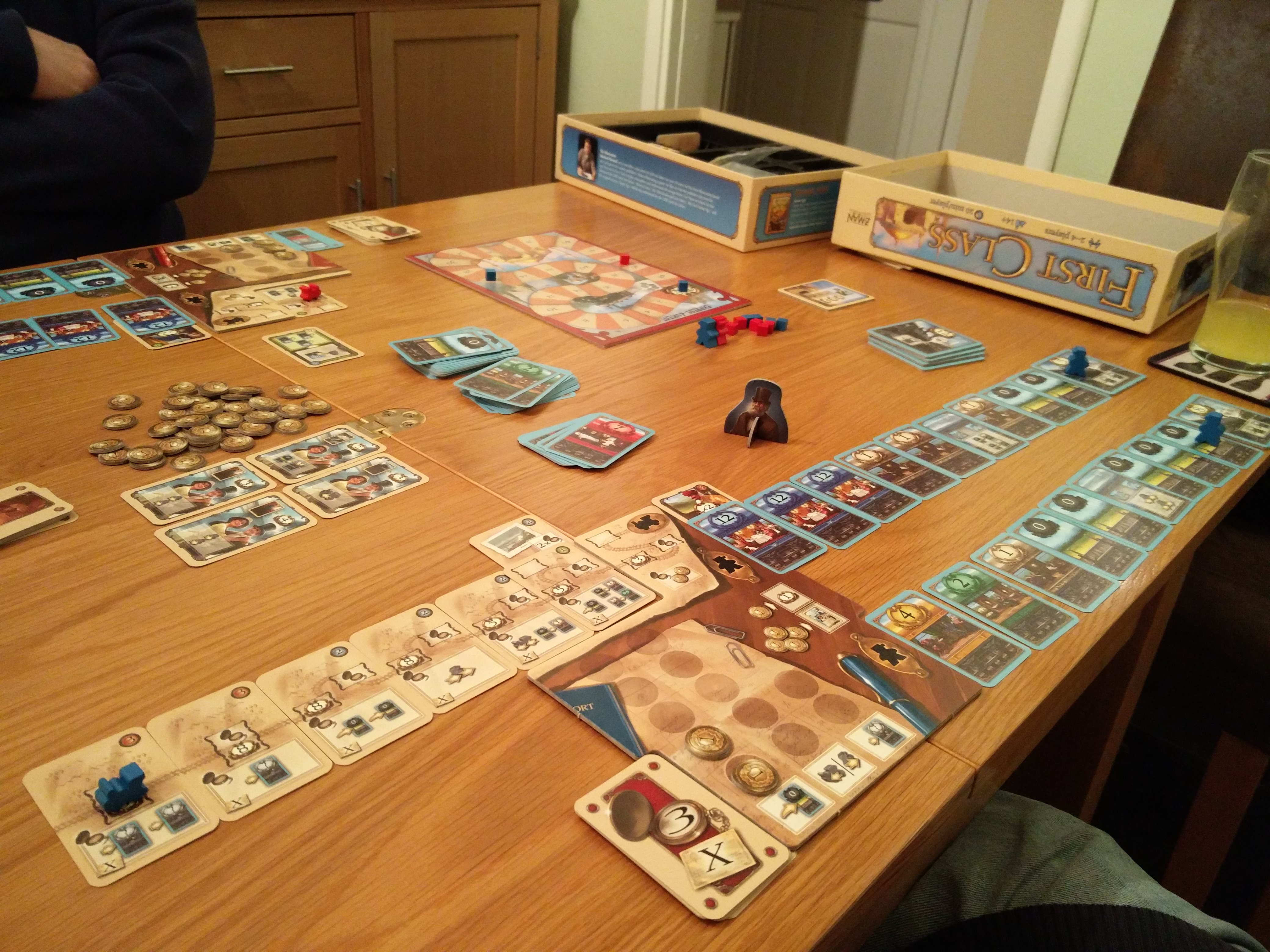 Though not all Eurogames are designed or produced by Europeans, they share a set of similar characteristics. A game need not fit all the criteria to be considered a Eurogame; however most Eurogames will contain these elements:

Other examples include The Castles of Burgundy and A Feast for Odin (pictured below). 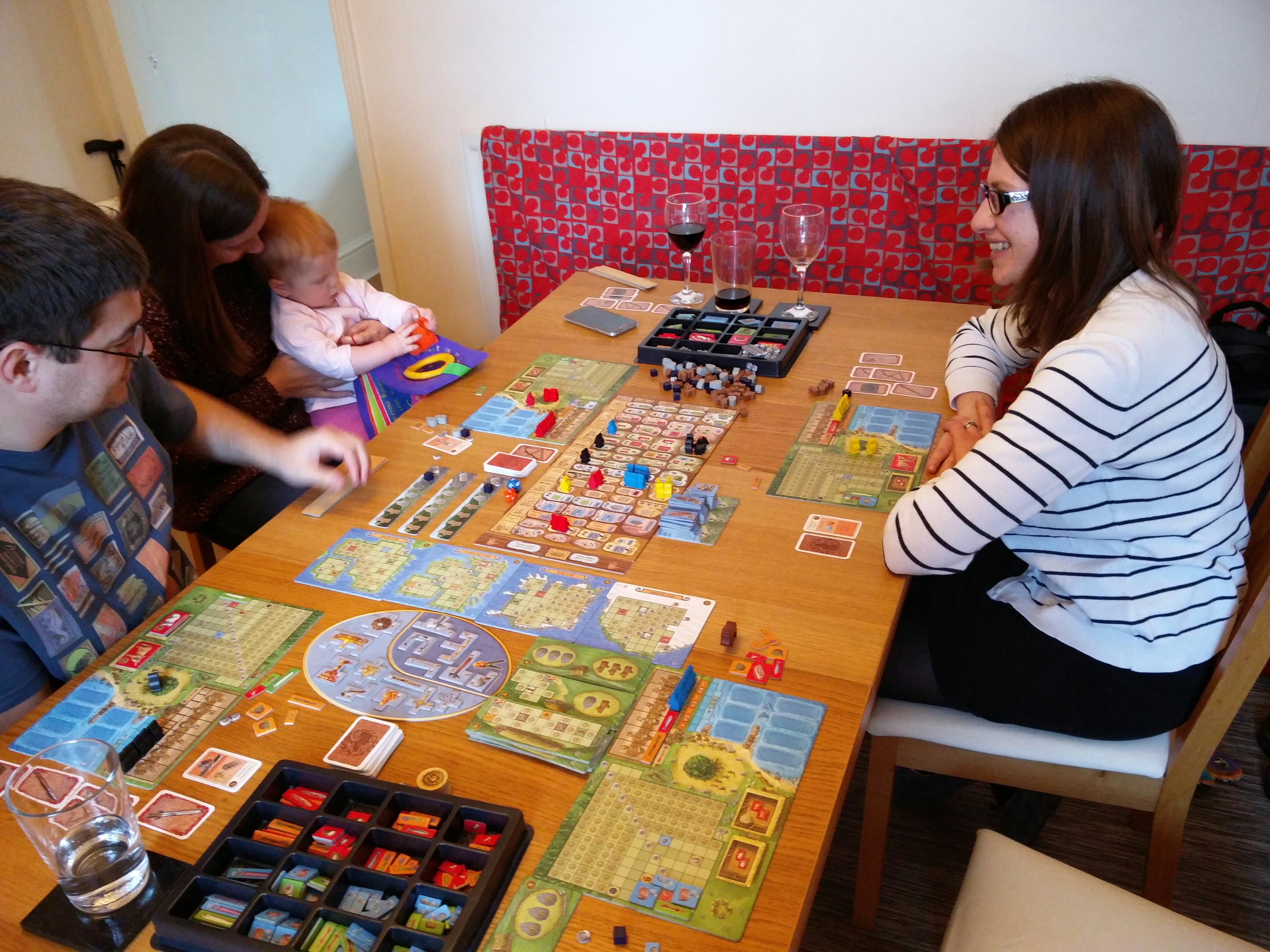 An excepted term for a short game (generally under 30 minutes) that can be used to 'fill' gaps between longer games.

Examples include Love letter and 6 nimmt! (pictured below). 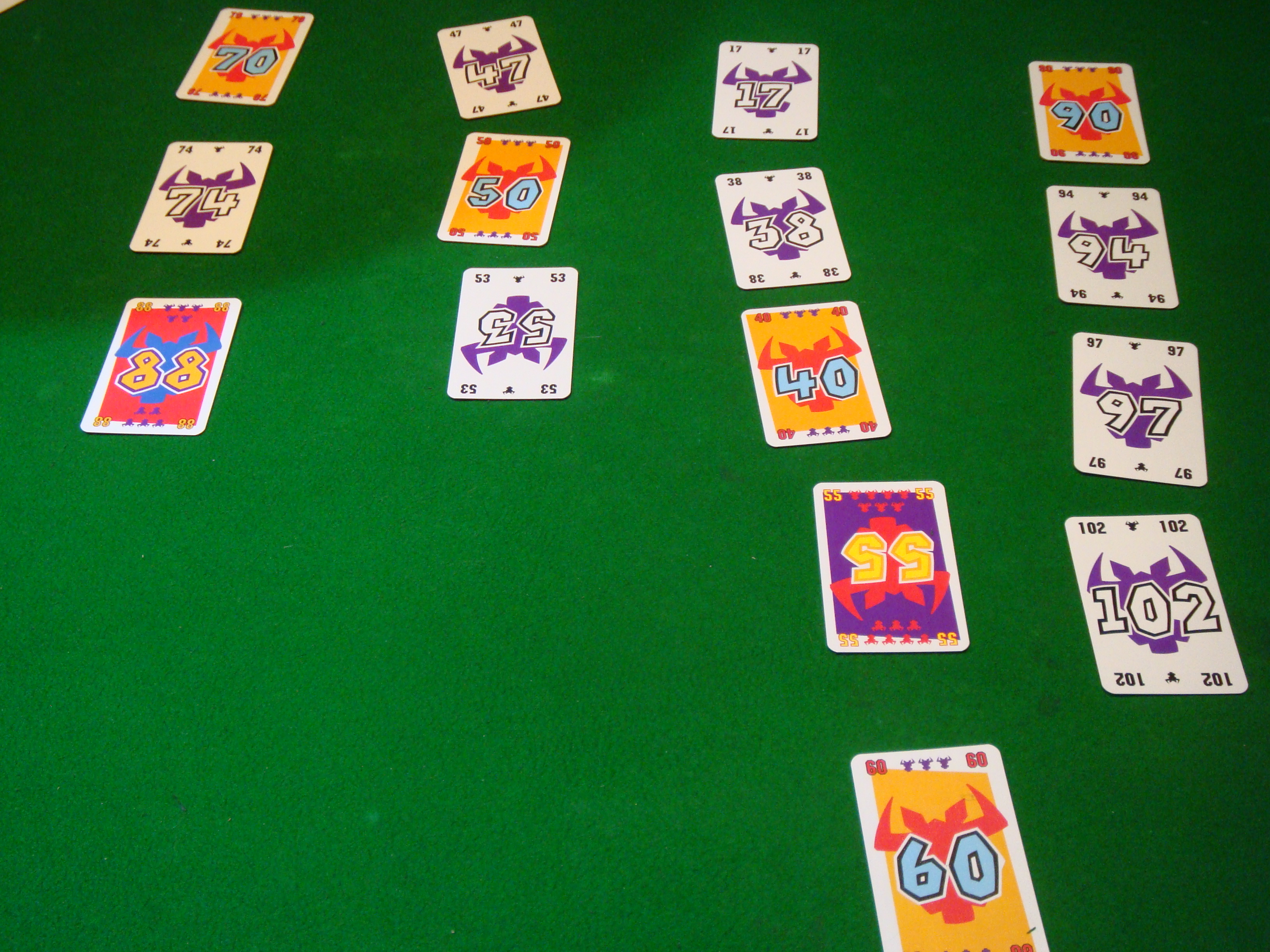 A term used to identify a game that is suitable for someone fairly new to 'modern' board gaming. With easy rules and accessible strategy, they can provide a useful starting point for those entering the hobby.

Examples include Carcassonne and Agricola: All Creatures Big and Small (pictured below).

This term applies to when one or more players manipulate their progress through a game generally without marking their position on a board. A fair comparison would be to call these games a variation on hide and seek. Players must use attributes like logic, cunning, bluffing and teamwork to ultimately succeed.

Examples include Specter Ops (pictured below) and Escape from the Aliens in Outer Space. 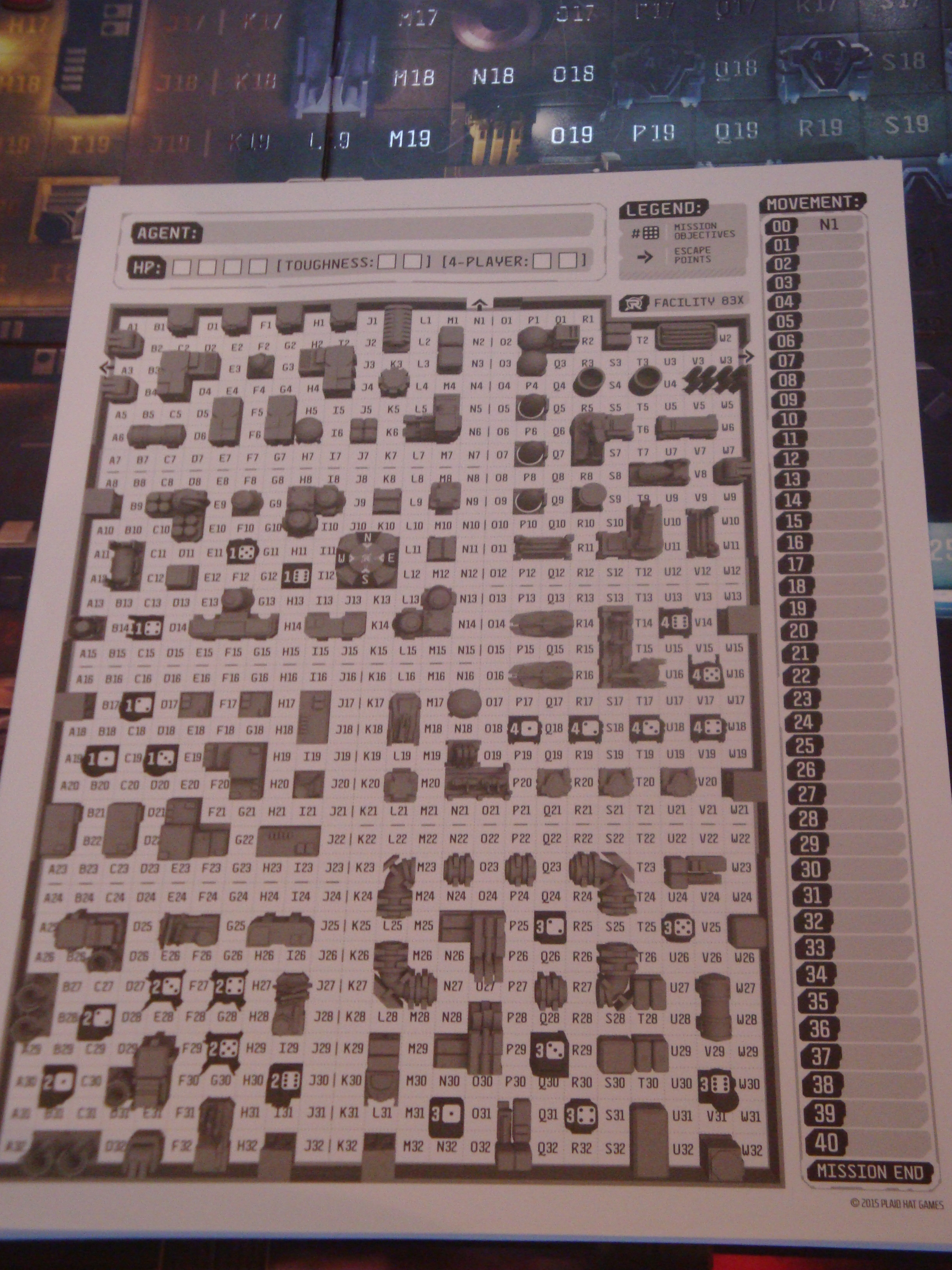 An undesirable situation whereby one player has the power to ultimately decide who will win a game (i.e. a choice between 2 other players, not themselves). Thankfully this is not a regular occurance in modern board games.

Used interchangeably, they refer to the elements that make up a board game's design e.g. Dice placement or Tile laying. A well designed game will usually combine a number of different mechanics or mechanisms that, when combined with the rules, create a unique design.

A small figure used as a playing piece in certain board games, having a stylised human form. Generally they exist to show that an action spot or area has already been used by the corresponding player.

Pieces crafted out of plastic, metal or wood that usually feature high levels of detail and are used to improve the aesthetics and immersion in certain types of board games. 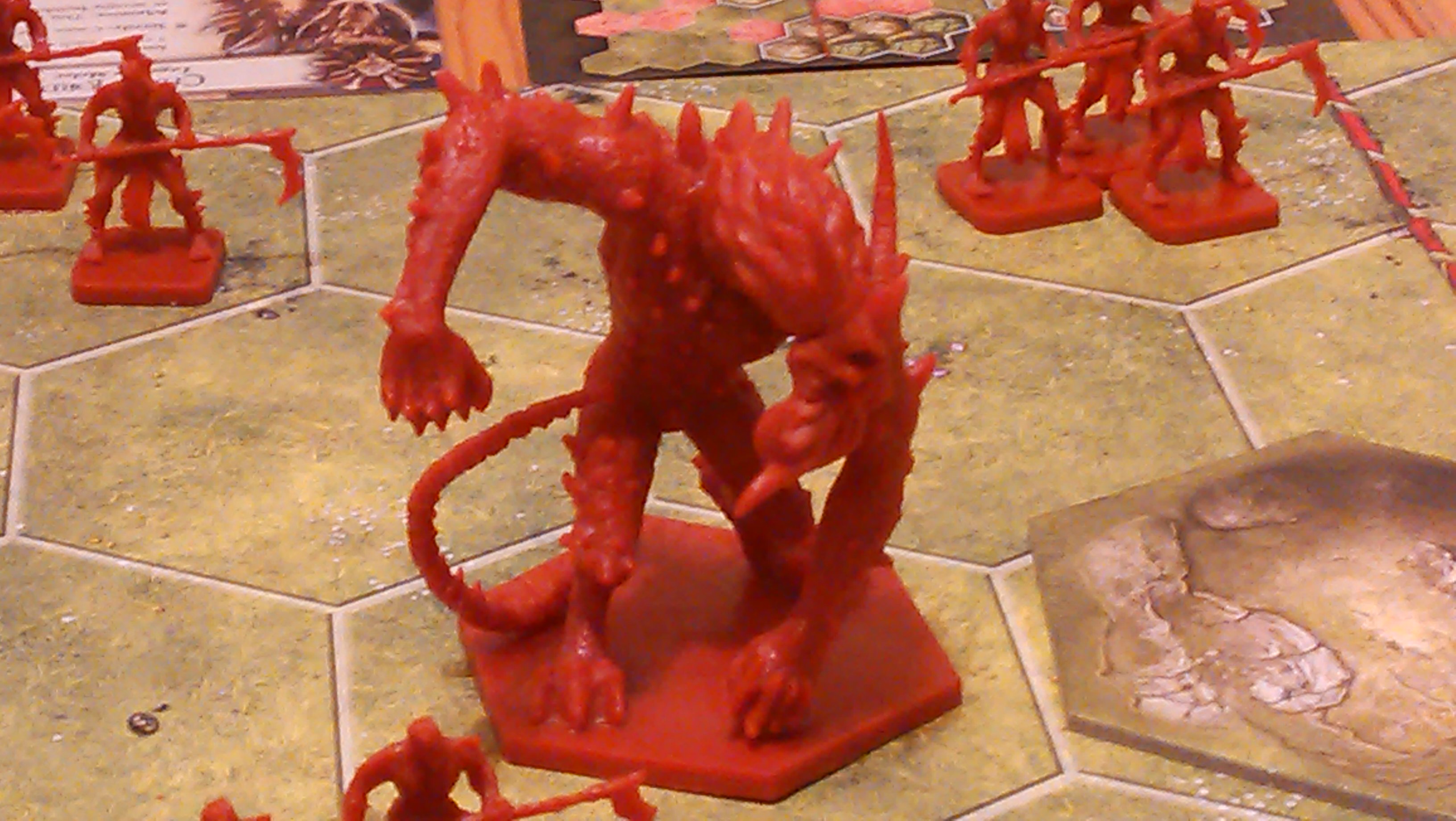 A design that lets players pretty much choose what they want to do within the rules. There will still be a clear way to win the game but how players go about achieving victory generally comes down to them. Most games employ stricter design methods that provide definite routes to winning the game: a sandbox game is the opposite.

Examples include Myth and Xia: Legends of a Drift System (pictured below).

This is broadly split into two categories:

b) Games where players are striving for sole victory but sometimes have to work together to prevent all players from losing.

Examples of 'a' include Dead of Winter (pictured below) and Castle Panic while examples of 'b' include Archipelago.

Examples include The Resistance: Avalon (pictured below) and Werewolf. 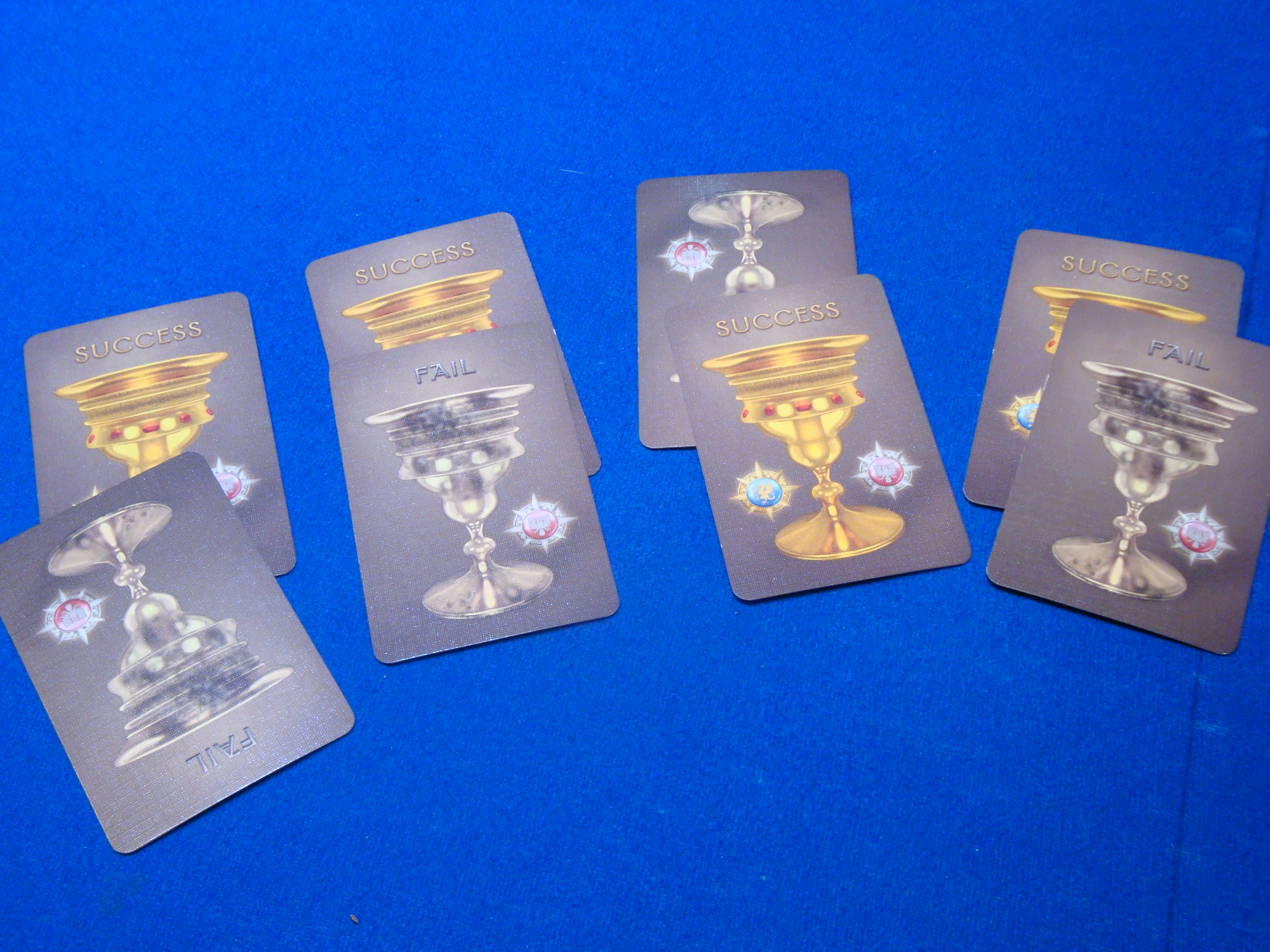 A game that can be played by, or is solely designed for, one player.

Examples include Friday and (not for the faint-hearted) Dawn of the Zeds.

A game where players form a tableau, or group of items (usually cards or tiles), that provide them with actions or abilities. Each player chooses what items to put into their tableau to help their overall strategy.

Examples include Machi Koro (pictured below) and Saint Petersburg.

Tile laying refers to a mechanism where players place tiles onto the playing surface. This genre could probably be further subdivided into:

a) Eurogames where the placement of the tiles directly scores victory points e.g. Suburbia or Castles of Mad King Ludwig.

c) Exploration games where tiles are laid out to form a map e.g. Expedition: Northwest Passage (pictured below) or Drakon

There are also other games that combine one or more of these sub-genres or else feature tile-laying as part of a wider game e.g. Railways of the World or Mage Knight. 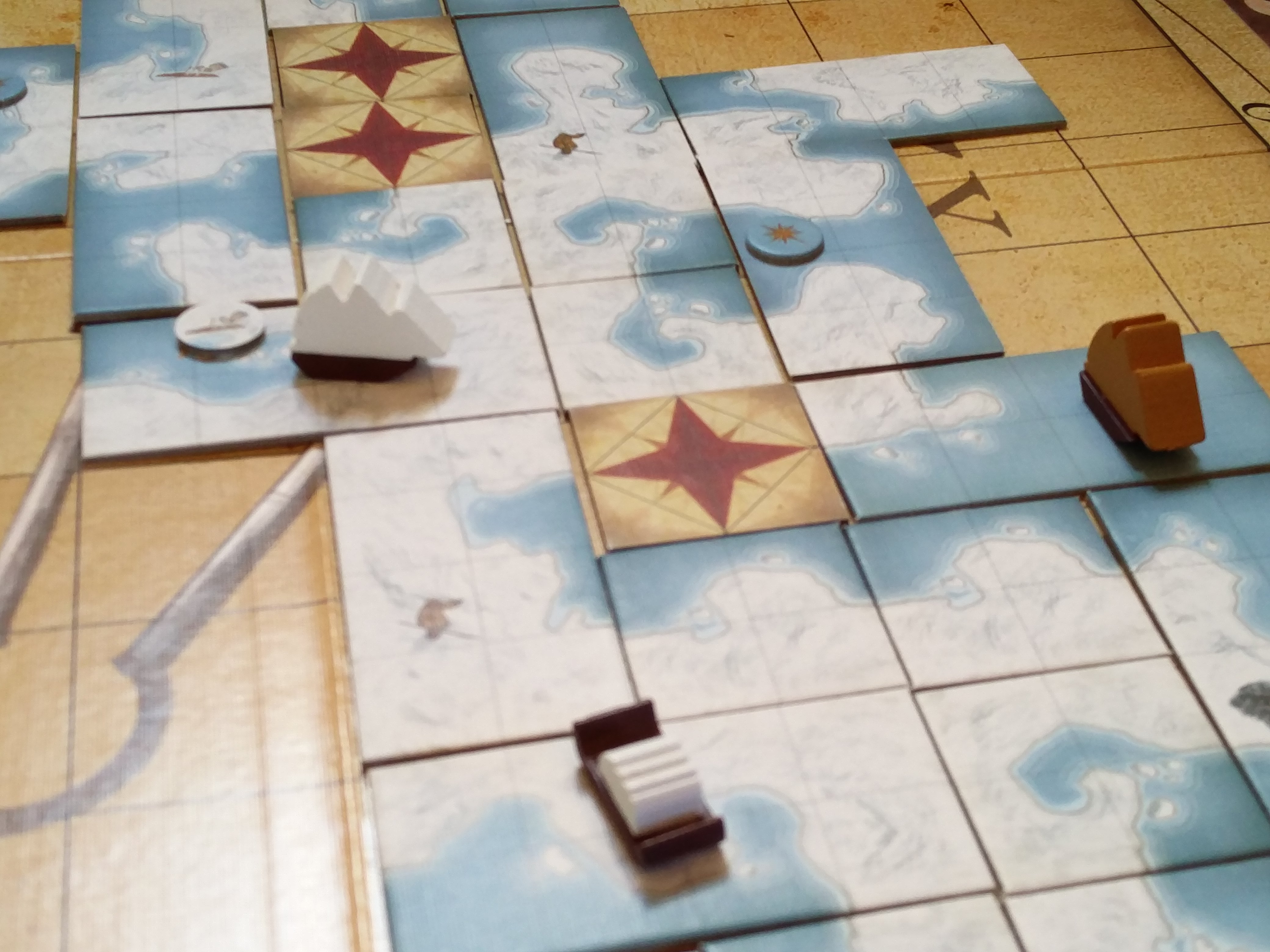 The standard method of measuring success in a Eurogame. Players will attempt to earn victory points by completing certain tasks; the player with the most victory points (VPs) at the end of the game is the winner.

This mechanism requires players to choose individual actions from a selection available to all players, usually by placing a worker or Meeple in their own player colour. Players generally choose actions one at a time and in turn order. If the game is structured in rounds then all actions are usually refreshed so that they become available again. There is usually a limit on the number of times a single action may be chosen in the same way for the same price. Once that limit is reached, an action can no longer be taken until a subsequent round or until the action space is no longer occupied by another player. As such, not all actions can be taken by all players in a given round, and action 'blocking' can occur. A variant of this is where a player must pay more (in money or workers for instance) to use an action that was previously used.

Examples include Raiders of the North Sea (pictured below) and Stone Age. 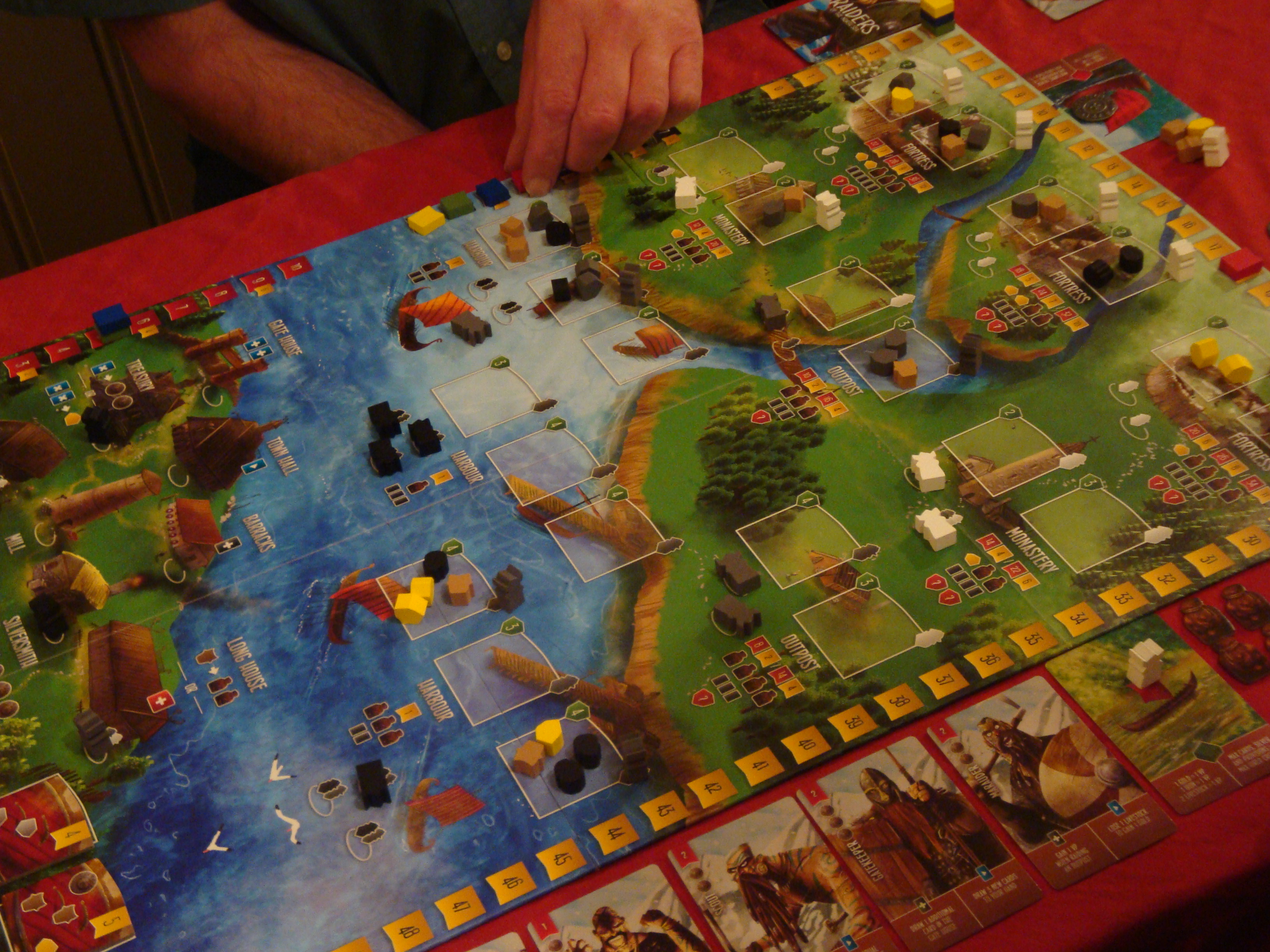 We hope this guide has been useful. It will be updated over time; if you think there are any glaring omissions then please let us know.